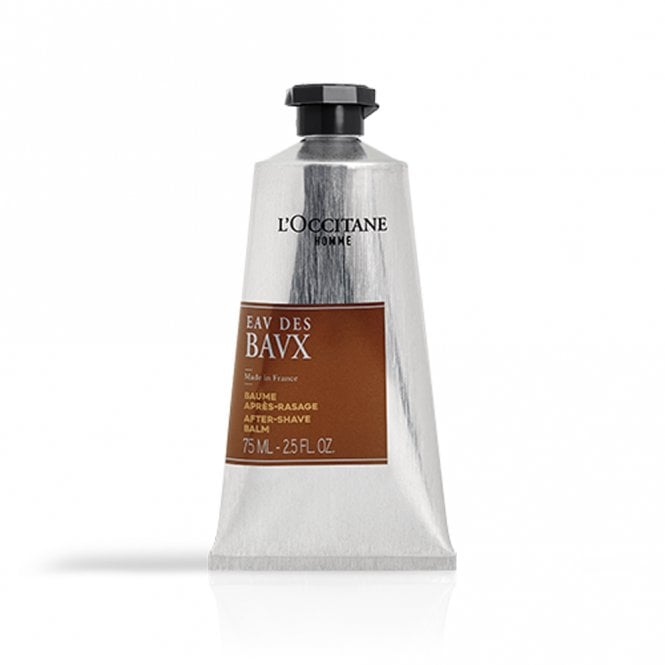 The woody notes of the L'Occitane Eau Des Baux infuse this After Shave Balm. This balm is enriched with protecting shea butter, moisturising plant-based glycerin, soothing bisabolol and firming extract of birch sap, this after-shave balm immediately soothes the skin, preventing irritations and feeling of tightness. Its light and fluid texture melts into the skin leaving it feels soft, comfortable, and lightly perfumed with the woody spicy BAUX scent.

The Eau Des Baux collection draws inspiration from the legendary knights of Les Baux, defenders of the 11th Century castle which sits upon a steep rocky outcrop overlooking the Alpilles in Provence that was frequently under attack, and defended by a band of brave soldiers. This long-lasting, woody fragrance conjures up images of Provence's swaying cypress trees which so captured the imagination of those medieval fighters that they adopted it as their emblem and – centuries later – the impressionist artists who captured the tree's flame-like dance as it sways in the powerful mistral winds. The undertones of incense lend a smoky and sensual effect to the fragrance, creating a dreamy aroma which instantly evokes the magic and mystery of the chivalrous tales surrounding the ruined castle of Les Baux. This mellow note becomes particularly evocative when combined with the crisp scent of cypress in this fragrance.

Delivery in the UK

We offer FREE standard delivery for all UK orders of £60 or over (*not including bulky items or alcohol).

There is a discount of £3 on Express Delivery costs for card-only orders.

Please note that due to customs restrictions, we are unable to deliver alcohol to Northern Ireland addresses.

Please see our Delivery Policy for rates on sending parcels internationally. Please note that we remove VAT from all international orders before purchase and that customers may then be liable for VAT & custom duties in their own home country.

If you are not completely satisfied with your purchase then please return the item(s) within 28 days of purchase in perfect condition for a full product refund or a replacement.

We realise it is very important to securely store any information that you provide. Our site uses high-level SSL encryption technology, the most advanced security software currently available for online transactions. On our website you can pay using your Visa or Mastercard debit/credit cards, via Paypal or using your Amazon account.